I first met Micosi when she was a 17 year old refugee from Rwanda; she had been in UK for 3 years with her mother and little brother and was living in Plymouth. During the Rwandan war Micosi was subjected terrible war crimes including multiple rape and bodily mutilation; she was only 3 years old when she was first raped. She saw her family including her grandparents, her father and older siblings tortured and killed in the most brutal way. Micosi was so affected by what she had witnessed and suffered herself that she stopped talking and hadn’t spoken a word for many years. She was referred to my workshop through Plymouth MIND. 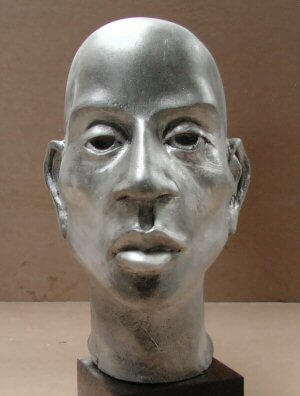 On meeting Micosi for the first time she was incredibly shy, she wouldn’t make eye contact with me and hid behind her mother, she behaved and looked more like a girl of 10 or 12 than of 17 years. I started by showing Micosi the clay, squishing it and moulding it with my hands, not attempting to make anything really just enjoying the feel material, I could see she was interested but she wouldn’t take any clay until her mother had first taken a piece and handed it to her. For most that first day we just played with the clay making thumb prints or rolling it, pressing it getting a feel for how forgiving the material is. On the second visit we made some very simple little abstract animals using clay and match sticks, Micosi took a long time on each part of the process and would hold the work very close to her face to examine it in great detail.

We worked together like that for 4 other visits, with me talking to her and her mother (her mother could speak a little English ) and Micosi very slowly getting a feel for the clay and happily making little animals.

On the next visit her mother wasn’t with her and although the first few minutes were a bit awkward Micosi soon got into the flow of working with the clay again, she enjoyed watching me showing her new things she could do with the clay but would only display her enjoyment with a slight smile. The break-through came when we started making clay faces, I showed Micosi some very simple techniques to change the look of the face, and so a plain little face can be altered and made to look extreme in shape just by squeezing the clay in a very controlled way. It was the realisation that she had control in this situation that made the difference for her, she could create, change and destroy this little face, and it was her choice. The change in Micosi was quite sudden, she made eye contact with me for the first time and although no sound came out, she mouthed silent words and smiled the first beaming smile that I had seen. We continued to work on more complex and elaborate sculpted heads, I was expecting these larger works to be as full of anger and rage as the smaller pieces were but the opposite was true, they became very serene and calm; she delighted in working in great detail making every part as perfect as possible.

Although the funding for this project had ended I continued to work with Micosi because to end the work now could have stalled the advances that had been made. I encouraged Micosi’s mother to work with her and follow my philosophy of quiet, patient understanding and gradually over several weeks I handed responsibility over to her. Happily Micosi continued her progress and spoke her first words a few weeks later.

Its 2005 Micosi is speaking much more and learning English she is planning to go to college in Plymouth.