When I was first introduced to Katy she was in year 10 (around 14 – 15 years old) she had many piercing’ lashings of black make-up and was very overweight. She had never handed in a complete piece of coursework or homework and was a persistent truant. When she did attend classes she was disruptive and difficult to her teachers and her fellow pupils. Her life trajectory was downwards and her teachers didn’t know what to do with her, many feared that she would end up being permanently excluded. She was placed with my class because her teaching assistant didn’t know what else to do with her. 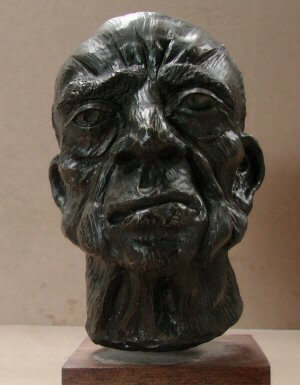 I do as little talking as possible at the start of a class, I like to get the group stuck in to being creative within minutes of the lesson starting, I encourage them to work quickly, pushing and pressing the clay into bold statements rather than little fussy details. Katy made an effort to disrupt the process but quickly realised she wasn’t making any headway so she spent most of that lesson with her head on the table with her earphones on, listening to her music.

The start of the second week was very much like the first but in the third week Katy settled down far quicker and she actually started to play with some clay but in a very half-hearted “I can’t be bothered,” kind of way. During the last few minutes of that lesson she had a flurry of activity, I went over to see how she was doing, I was amazed at what I saw, Katy had created the most expressive face in the whole class, full of all the elements of emotion and age that I had talked about over the last two lesson, this proved to me that she had been listening very carefully to everything I had said even though she was feigning disinterest.

Katy enjoyed being extravagant and boisterous with the clay and over the next weeks produced some very interesting character sculptures. To stop pupils getting precious about their first attempts at sculpture, I suggest that they keep changing the characters and pushing the realms of their imagination until a desired affect is achieved, Katy took this advice and applied it enthusiastically. Each time an interesting change was made a digital image was taken and each change was more extreme with gouges and slashes as soon as one image had been digitally captured Katy couldn’t wait to change it and create another. The more praise she got from me and her peers, the more creative and experimental she became.

By the End of the fourth week Katy admitted with a smile that the class wasn’t as crap as she’d thought, Katy had found something she could be good at. Over the next weeks she was incredibly driven and determined to gain as much knowledge from me as she could. During week six of this ten week sculpture workshop I introduce and element that pushes their creative expression and tests what has been learned. I ask that each pupils creates a character from the series of traits that I supply, In this case I asked for a male of 70+ years from a religious family, with a specific profession, a medical complaint of some kind that might show on the face, three or more children and he can be from anywhere in the world except the UK.

Katy’s final work is the piece featured here it is a culmination of her thirst for creativity and her need for achievement and ultimately warmth of acceptance.
It’s a stunning work of art from a girl who had never thought of herself as creative and may never have had the chance to show what her real potential was if she hadn’t been put in my class on that first day.

My final challenge during these workshops is to ask each pupils to write about the
Character they have created.

Here is a little of what Katy wrote about her character sculpture, her actual essay was over 1000 words long.

“This is my sculpture he is called Heimy Goldstein, age 72. He lives in New Jersey in America and has been a fishmonger for 40 years, he always smells of fish. He hates fish. He has 6 grown up children and his wife died of cancer last year that’s why he looks so sad. He has had a very unhappy life and gets stressed a lot he doesn’t smile very much and he can’t remember when he was ever happy. When he was young he wanted to be a singer and sing in a club in Vegas, but he got a girl pregnant so had to get married. He has had two heart attacks and now also has a stomach ulcer too. I think he will soon die.”

Katy was labeled as troubled, disruptive and a no-hoper, her future was mapped out – pregnant by 16 and living on benefits for much of her life – but she changed all that, she bucked the trend, through a little piece of creative interaction her confidence and self esteem was raised to such an extent that one day she had the courage and sense of self worth to contact CHILDLINE and admit for the first time that she had suffered abuse from the age of three. Katy got the help and support she needed.

Katy finished school without further problems and went on to study at Plymouth College of Art and Design; she is now 21 years old and working for a charity in India helping street children to create art and escape from abuse.